Men Get Sad and Lonely Too 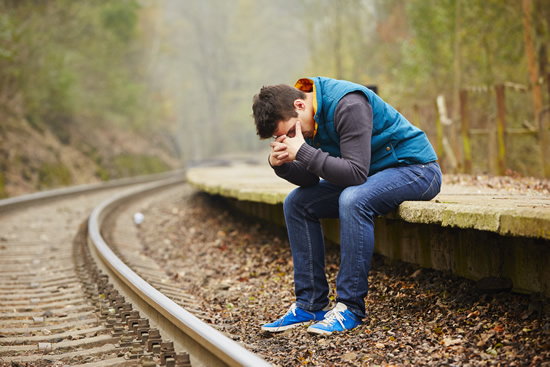 The idea that only women struggle with this problem is a myth. Although men can process sadness and loneliness differently from women, men still are quite vulnerable. Lack of Communication and Loneliness

Men generally aren’t as quick to communicate compared to women. There’s more of a struggle to connect with others on a meaningful level.

It’s not an uncommon challenge for men to develop vital and deep friendships with people they rub shoulders with at work and in their communities. Many feel like they know hundreds of people but their relationships are a mile wide and an inch deep.

Because of this, loneliness in men is fairly common. It’s not that men desire to be lonely. Loneliness is a terrible feeling.

Some men don’t know how to build deep friendships, don’t realize the need or just figure that’s how things must be.

But that isn’t true. Things can and need to be different for men to be healthy

This doesn’t mean that men are to share every gory detail of their lives with others hoping that transparency leads to friendship. They must test the waters and see if there’s trust first.

Some of the best friendships, ironically, are more of something that happens to a person instead of trying to force something to work. Forcing things almost never leads to deep friendship connections.

Men desperately need other people who are “in their corner.” They need people who believe in them.

There’s a lot of pressure for men to be emotionally stable and strong. While that’s honorable, sometimes attempts to play such as role breaks down.

Men have hurts just like women do. And stuffing those injuries deep in the soul to give the appearance of strength can mean big-time trouble later on.

Men aren’t invincible. There is no superman. The strongest men aren’t those who ignore their sadness.

The strongest are those who realize they have a problem. Men can’t fix their life difficulties on their own. They can’t make their sadness and loneliness vanish while remaining in a vacuum.

Men need others to help them through these struggles. Everyone does.

You can experience a much higher quality of life than that. You can take courageous steps towards something better.

Whether that means help from a significant other, venting to a loyal friend or seeking the support of a trusted professional, there is hope!

These realizations and steps towards something better will go a long way in relieving sadness and loneliness in men. Schedule your appointment online using our online scheduling tool, call us at (949) 393-8662, or text us.

Money Matters: Seeing Eye to Eye in Your Relationship

December 2, 2013
When couples first get married, one of the fundamental changes they face is suddenly sharing their…
Read More

Financial Infidelity: What to Do When Your Spouse is Hiding Debt?

March 25, 2014
If you’ve never thought of hiding debt as infidelity, think again.  For most, infidelity is cheating–any…
Read More